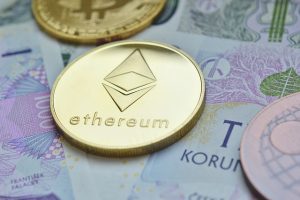 Etherium turned five this year and is currently the largest blockchain platform that runs thousands of decentralized applications.

Ether (ETH) is Ethereum’s cryptocurrency. It’s price and market cap are only second to Bitcoin.

Ethereum platform features programmable smart contracts and dapps (decentralized applications). Dapps can be built and run without downtime, fraud, control, or interference from third parties. It means you can save, spend, and invest without lawyers or notaries. That makes things cheaper and quicker.

To power dapps, Ethereum uses its own blockchain-powered programming language that is called Solidity.

Bitcoin was created as an alternative to fiat currencies and is a medium of exchange and store of value, while Ethereum was intended as a platform to facilitate immutable, programmable contracts and applications via its own currency. Also, Bitcoin is limited to 21 million coins, but Ether has no such limit

The launch of DAO (Decentralized Autonomous Organization) — first brought ETH up to $21, and then down to $11 after the equivalent of more than $50 million was stolen (because of a weakness in DAO smart contract software). What does it have to do with time-travel? Wait just a bit.

Most Ether holders agreed to restore the network to its pre-theft state, conducting a “hard fork.” But some didn’t. It made Etherium split in two: Etherium (ETH)  – a reality where theft didn’t happen, and Ethereum Classic (ETC)  – where the original chain continued. Most of the founders stayed with ETH, and it keeps developing, while unfortunately, ETC is no longer compatible with Etherium updates.

Just a few months later, a DDoS attack made price slide further down, to the range of $7-$9 per coin. Then steps were taken to improve the network’s resilience, and it changed dynamics for the better.

At the start of 2017, Etherium’s price rocketed, while Bitcoin’s number of unconfirmed transactions had reached 200,000. Many investors and miners were looking for an alternative to BTC.

In January 2018, Etherium rocketed to $1400. You could check eth to btc chart every hour to see the coins race. But then came the Great Crypto Crash. All went downhill, and by September, the cryptocurrencies market fell by 80%. ETH kept falling, so from $1400 in January, ETH broke its fall below $100 in December 2018 with promises of updates.

The quick rise of the crypto market created a lot of skepticism. Is it just a bubble? It’s all too good to be true. But it takes time for the world to catch up with new technologies. It takes time to polish the workings, to deal with legislation, reach desired safety, etc.

The Ethereum platform is evolving and perfecting. A lot of work was done in 2019, and it started paying off. Big players like Samsung, Microsoft, and Opera internet browser got involved in the Etherium ecosystem.

ETH price didn’t grow much in 2019, but the efforts laid the foundation for growth in 2020.

Ethereum started the year with a price of $128 and an upward trend. Price went up to $285 in February, but the pandemic changed growth into a drop. The Crypto market almost halved in March, but it has been a steady climb ever since, while the world discovers new uses for blockchain in our new reality.

Decentralized Finance (DeFi) starts blooming by August, and Etherium price goes up since a larger part of dapps are DeFi.

It has been a difficult year, but a good one for Etherium. Its market cap is over $48 billion at the time of writing. The year is not over, but ETH has already more than doubled. Etherium surpassed the record for the number of daily transactions set in January 2018. The decentralized finance (DeFi) market is providing lots of activity.

Ethereum is becoming a first-choice smart contract protocol, as multi-billion corporations start to build on top of Ethereum.

And for the first time in history, Associated Press used Ethereum and EOS blockchains to publish U.S. election results.